Dinosaurs and Millions of Years – Part 3

After discussing Carbon-14 dating and uniformitarianism we find that dinosaurs can’t really be dated at millions of years. So, how can we truly know how old dinosaurs are?

In 1999 a paleontology student was walking through his uncle’s badlands ranch when he saw three vertebrae. He dug out some of the vertebrae and, after weeks of digging and excavation, he dug out the tail of a Hadrosaur. This Hadrosaur was identified as an Edmontosaurus and was dubbed “Dakota”.

Dakota became famous and has gathered scientists together like bees to honey. What was so big about Dakota? Fossilized flesh.

Fossilized flesh was the find of the century and it was not taken lightly. It took a very long time to get Dakota fully researched and his skin has become the talk of many debates.

Dinomummy was published in 2007 and attracted attention as it captivated young readers with a tale of a Hadrosaur trying to survive in the Cretaceous era. It started with a peaceful day and turned into a catastrophic event that left all the dinosaurs dead. It was, of course, referring to the theory that an asteroid killed all the dinosaurs.

The theory for Dakota’s amazing fossilization is stated as this in Dinomummy:

Dakota is sinking quickly into the wet sand, and soon only his chest will be exposed to the predators [Borealosuchus]. In less than an hour Dakota will slip out of sight. 1 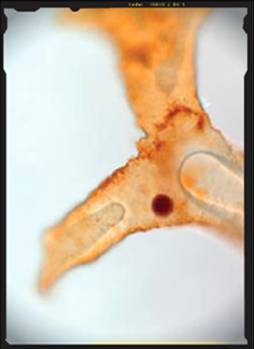 This is a picture of the flesh that scientists found in a Tyrannosaurus Rex body.

Careful inspection of Dakota gives evidence to the fact that he was found in a former water environment consisting of burial materials such as mud. 1

In 2009 another Hadrosaurwas found with tissue that was identified as collagen (protein found in ligaments), hemoglobin (helps make red blood cells), elastin and osteocytes (lives in bones). 2

Then there was the discovery of a Tyrannosaurs Rexbone that contained red blood cells. Dr. Mary Schweitzer, in 2005, found the unusual cells and said, “it was exactly like looking at a slice of modern bone. But, of course, I couldn’t believe it. … The bones, after all, are 65 million years old. How could blood cells survive that long?” 2

In an American Association for the Advancement of Science meeting Schweitzer showed the scientists two pictures of blood cells. “One of these cells is 65 million years old, and one is about 9 months old. Can anyone tell me which is which?” Schweitzer asked; nobody could answer. 2 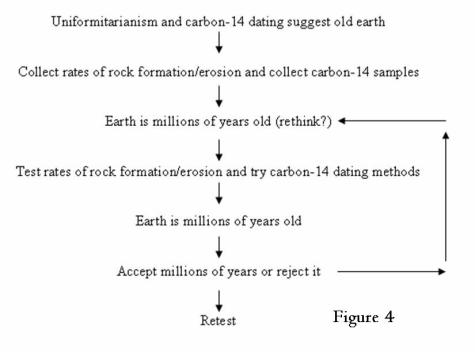 The material found in these dinosaurs was pliable and stretchy, and would snap back into its original shape when pressure was released. When a stretchy material is found today, in a deceased animal, it would be assumed that the creature died recently.

After careful study the concept of millions of years has been misinterpreted and is a faulty argument that has a decreasing amount of scientist advocates. 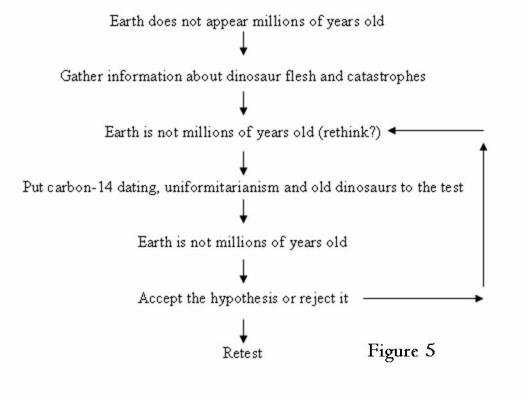 If dinosaurs indeed, did live within the last couple of thousand years then the discovery of perishable organisms in dinosaurs would be no surprise. If rock can, indeed, form in hours then the fossilization of dinosaurs would have been a catastrophic event of some sort that took the animals of that day and buried them in vast amounts of mud that would form into rock. This rock would then encase the fossils until paleontologists can find them.

If millions of years applies to the rules of the scientific method that it should go as figure 4 states.

However, if millions of years is a rejected hypothesis then the scientific method that would say otherwise would look like figure 5.